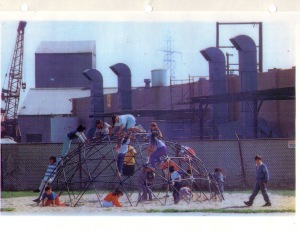 Alegria de la Cruz is the Legal Director for San Francisco-based Center On Race, Poverty and the Environment (CRPE). Along with Oakland-based Communities for a Better for Environment (CBE), CRPE launched a lawsuit in early 2010 against the California Air Resources Board (CARB) to challenge the Cap and Trade provisions in AB32, California’s Global Warming Solutions Act. The two environmental justice groups charged that the law would place continued pollution impacts on low-income communities of color in California (for additional background and analysis at the time, see this article).

At the time of the interview, the lawsuit had gone through numerous twists and turns. The suit was filed in March, 2010; in May, a Superior Court judge ordered CARB to halt any action on Cap and Trade and to conduct an analysis of alternative methods for meeting the state’s emissions reduction targets as mandated under AB32 (see this article). CARB immediately appealed, and petitioned to continue developing the program, even as it studied the alternatives. In June, CARB produced an alternatives analysis for public viewing. In July, before the court’s final ruling had come down, CARB announced a decision to delay implementation of the Cap and Trade rules until 2013, in order to address numerous concerns (which, as de la Cruz points out, are largely the concerns of industry). In August, after a 30-day comment period during which the public was invited to share its concerns about the alternatives analysis, CARB announced its decision: Cap and Trade would go forward. In 2012, industries would begin receiving pollution permits in order to stimulate the market in emissions trading, but mandatory emissions caps would not be applied until 2013.

Jeff Conant: Can you summarize the stages that the lawsuit has gone through?

CARB has attempted to ostensibly comply with the Superior Court order by doing a new alternatives analysis, and has gone back to Superior Court to request that the court release its stay. There is still some possibility that the Superior Court finds that, not only did CARB not comply with the California Environmental Quality Act (CEQA) with its alternatives analysis, but that CARB also went forward with the Cap and Trade rulemaking, and that those two actions at once violated the court order.

JC: What has been your concern with the alternatives analysis itself?

AdlC: At the Superior Court level, the judge was concerned with the lack of deep analysis of alternatives to a Cap and Trade plan. He felt that CEQA required CARB to look at a range of alternatives, like a Cap and Fee, a Cap and Tax, a Cap and Dividend, and direct regulations. He also, in his order, talked about the importance of making some space between its alternatives analysis and its moving forward with the Cap and Trade rule, because basically with the two proceedings moving forward concurrently, there was a real risk that any new analysis that CARB undertook was really going to be a post-hoc rationalization for the choice it had already made. And that’s exactly what CARB did: it moved forward concurrently with these two proceedings.

That said, the analysis itself, outside of that fundamental problem, still remains woefully inadequate, especially regarding the health impacts for communities of color that we know will result from Cap and Trade’s implementation.

It’s even more clear the extent to which these impacts will be felt by environmental justice communities as CARB has moved forward with its Cap and Trade regulation. Ten days before the final approval of that regulation, CARB released something called an “adaptive management plan” which both recognized the risk that greenhouse gas emissions and toxic co-pollutants would increase in environmental justice communities, and purported to address the associated health concerns. The idea that this plan, released a mere ten days before final approval of the rule, could purport to address those health concerns, was frankly insulting to environmental justice advocates who have raised these concerns for years.

Some ten days before the regulations go into effect, this plan comes out, and the plan is vague, the plan is unenforceable, the plan relies much too highly on CARB’s discretion, and the plan creates some impossibly high hurdles for CARB to jump before it could take any action to protect people’s health as a result of increased emissions.

JC: Does anyone know about this plan outside of the courtroom?

AdlC: It was illustrative of the plan’s flaws that you had air district managers at the final Cap and Trade rule who all stood up together, from all the air basins that are most polluted, with real concern that there was no plan for CARB to reach out to these district managers who would have the real data, the real information, and the on-the-ground perspectives that CARB needs to understand, when emissions go up, how they have gone up and what kind of impacts that is having on local communities. So each of them gave that testimony and said how important it was for CARB to use their expertise, to use the information that they collect in a way that is timely and enforceable, because at this point the plan lacks teeth, and lacks any requirements for CARB to engage with the experts in this field.

JC: So is this actually a big step backwards in regards to what Environmental Justice communities have been fighting for? Will this lead to decreased regulation and increased emissions?

JC: What’s your take on the delay in implementation that was passed some months back?

AdlC: That decision was surprising, to say the least, given that five days before the decision was announced, CARB had gone to the appeals court and talked about how important it was for them to push through Cap and Trade as fast as it possibly could because it was under these very strict timelines to get this plan off the ground, to enforce it, to implement it, and after the court ruled in their favor and allowed them to move forward with the Cap and Trade rules, some mere five days after that decision they announced that they were delaying enforcement for a year.

If I’m seeing the silver lining on this massive cloud of pollution that is Cap and Trade, the delay in enforcement shows that there are some real concerns that ALL stakeholders have with the Cap and Trade regulation, But given what they’ve done to the rule, all of those changes have been in response to the polluters’ concerns and not to the communities’ concerns. And so, if anything, I think this year of continued implementation with no enforcement is going to allow the entities with power to keep pushing CARB to do what they want them to do, which is what they’ve done throughout this entire process. It’s been a very political process, completely controlled by the polluters’ interests. CARB has really not shown that it’s representing the interests of all Californians.

We made the point during the last hearing that not only does AB32 require that CARB design regulations in a way that does not disproportionately impact vulnerable communities, but it also has to respect California’s non-discrimination provisions. There are very clear state laws that say that CARB can’t discriminate against people of color, and it is very clear that this rule will do exactly that. This rule will impact low-income people of color more negatively than it will any other population in California, and that is deeply problematic.

JC: How do you see the success or failure of community organizing efforts around Cap and Trade in California?

AdlC: Community organizing around this issue is really difficult. We’ve seen how amazing it has been for communities to stand up and protest what’s happening at Wall Street. And with the markets impacting real people, with the 99% of Americans continuing to suffer while the 1% makes all the money, what’s happening with the Cap and Trade program and how it’s going to impact poor people and people of color, is very similar, yet there hasn’t been that same kind of groundswell of opposition; it remains a highly technical conversation, it remains something that feels out of peoples’ control. And, CARB has made it that way.

Time and again when we’ve gone to give testimony, we’ve collected data from every jurisdiction where Cap and Trade has been implemented – we’re talking about lawyers and scientists who are highly skilled in this regard, with the best, most cutting edge, most current information – and we’ve gone up there and given testimony about the evidence we’ve provided, and CARB has told us we don’t get it.

To be insulted in that way, and for CARB to really not get it themselves, shows to what extent they are willing to dismiss community concerns, as well as the representatives of those communities’ concerns.

There is still some possibility that the Governor of California, Jerry Brown, will see the writing on the wall, and will see how this program is going to not only not benefit California’s economy, but also deeply impact the most vulnerable Californians. He’s an environmentalist and a visionary, and we hope that at some point he’ll see that this is just an opportunity to create another Wall Street on the backs of the poorest Californians, that it’s just a way of trading and making profits on their health, and that that’s unacceptable.

JC: What comes next?

AdlC: I think this next year that CARB has given itself to fine-tune Cap and Trade is going to make it even worse than it was already. It’s deeply problematic and it will not work. It’s not going to reduce green house gas emissions, and it is going to deeply impact poor people who can least afford it. We are going to be deeply engaged in ensuring that California at least takes the right steps in other regards, so that when it fails, hopefully, there will be some things going forward that will still allow California to take a different direction. We still have hope that there are ways to impact California’s policy decisions and protect our communities, because Cap and Trade will fail.

JC: As an advocate for environmental justice, where do you find hope in all this?

AdlC: I think one of the things that has continued to sustain me personally in this battle is the ways in which we’ve been able to see the global implications of this play out, and to know that there are communities in Mexico and in Brazil that are engaged in the struggle with us, as difficult as making those connections is. And as tough as it is for our communities to engage, I think there’s real solidarity and understanding that’s being created through this experience of trying to understand how this program is going to hurt us. And I think there’s some real beauty and power in that. And to the extent that we can keep hanging on to each other, and making those connections stronger, and louder, and more powerful, we’re going to continue to make those interests hear us.

I am a writer, social and ecological justice advocate, world traveler, family-man, gardener, bee-keeper, baker & tender of life in all her fine forms. Here on The Watering Hole you will find my books, both published, unpublished and in progress, my photographs and artwork, and my short (and long) essays and ruminations here in the late stages of the anthropocene as humanity struggles to turn away from millenia of destruction toward a future of co-existence with all creation…or not. View more posts