At the Museum of the Vietnamese Revolution, in Hanoi, you are encouraged to follow the course of Vietnamese history from the thirteenth century to the present.

Every museum offers a particular narrative, a story that is in the interests of those who arranged the objects there. In some, the story may be more transparent, or less. In history museums, where the aim is to create a sense of what really happened, the narrative will tend to be clear; in art museums, not so much; though there, too, a particular story is told for the benefit of a particular class of people.

In this museum, in one of a very small handful of Communist nations still in existence, the story is particularly clear.

In the first salon is a map, carved in black polished stone, of the nation of Vietnam, curving like a dragon’s body from the Gulf of Tonkin near China in the north to the Mekong Delta spilling southward toward the Malay Peninsula. Inlaid in the stone, in mother-of-pearl, are symbols of the nation’s great natural resources: timber, minerals, foodstuffs, rubber, game. Beyond telling the viewer that this is a resource map of Vietnam, we have no notion of who created this map, or when, or for whom. But it is for good reason that this is where the story begins. Every nation-state exists as an institution to exploit resources, from human labor to natural wealth, revolutions notwithstanding.

In this same salon is a poster, from 1959, showing the human chain of oppression that, according to the artist, has defined this nation’s history. At the top, a fat French colonialist, in pith helmet, obese and self-satisfied beneath a blue parasol, is counting out money on a tray. He is carried on the backs of wealthy Vietnamese, sharing out money themselves, who, themselves, ride on the backs of merchants offering drinks; below them, a soldier, a nurse, a plantation owner cracking a whip; below them, the crushed and withered bodies of the poor, beaten, defeated, broken, carrying sacks of grain and attempting, in vain, to feed their hungry children. 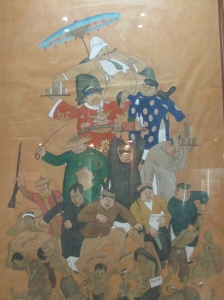 The next thirty rooms tell the heroic story of the Vietnamese peoples’ resistance to foreign invasion and occupation; first the Chinese, for centuries; then the French, arriving with gunships in the middle of the nineteenth century; and then the Americans, arriving to stem the red tide of Communism after the French defeat in the 1950’s. Cases are filled with artifacts of war – weapons and instruments of torture, grainy photos of battles, shredded bits of uniforms, cannonballs, bullets and grenades; more cases are filled with the agitprop of revolution, depicting the rise of the Communist party – pamphlets and letters and declarations and documents, including the pens and the presses used to produce them; flags and portraits of heroes; newspaper clippings and photos and cast statues of Lenin and Ho Chi Minh. When we arrive at the ‘fifties and ‘sixties, flame throwers and bullet-riddled flak jackets and metal scraps from downed planes; the improvised weapons of the Viet Cong and the art made from the scraps of war. 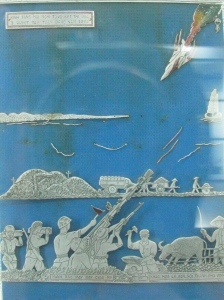 For a thousand years, the Vietnamese were kept busy throwing off the dogs of war. The story is dismal in its wasting of human lives, but its telling offers it up as an epic of heroic resistance and eventual victory.

Arriving at peace, in the nineteen-eighties, the story changes. You come to a room filled with a different sort of objects; objects that appear to represent progress, development, industry: PVC pipe-fittings, and synthetic rubber tires, and a turning lathe, and a mechanical plow; the fruits of steel refineries and metallurgy; a case filled with packages of hybrid seeds. And then, a large diorama of the nation’s first and largest hydropower dam at Hòa Bình; a scale model, in a plexiglass case, of the nation’s first offshore oil and gas drilling rig in Vung Tau. A large, colorized photo of the rig depicts it with the flame from the gas separation station burning over the sea like a torch of freedom, its black smoke curling upward toward the heavens.

Industrial development, we are told – the limitless sacking of resources for progress and prosperity – is the apotheosis of history, the shibboleth of sovereignty, and the fruit of a people’s heroic resistance to foreign domination.

If the story is an epic, it is one that ends not in heaven’s glory – with the people’s victory vindicating centuries of struggle – but in the basest earthly tragedy – from the exploitation of a people and a land by foreign powers, to their exploitation by its own domestic rulers, still and always in service to the market.

I am a writer, social and ecological justice advocate, world traveler, family-man, gardener, bee-keeper, baker & tender of life in all her fine forms. Here on The Watering Hole you will find my books, both published, unpublished and in progress, my photographs and artwork, and my short (and long) essays and ruminations here in the late stages of the anthropocene as humanity struggles to turn away from millenia of destruction toward a future of co-existence with all creation…or not. View more posts